This is an old German fountain pen I bought through eBay for £12.46 including P&P. It’s “new old stock” (NOS) which is unsold shop goods, later offered for resale. The box was water-stained. 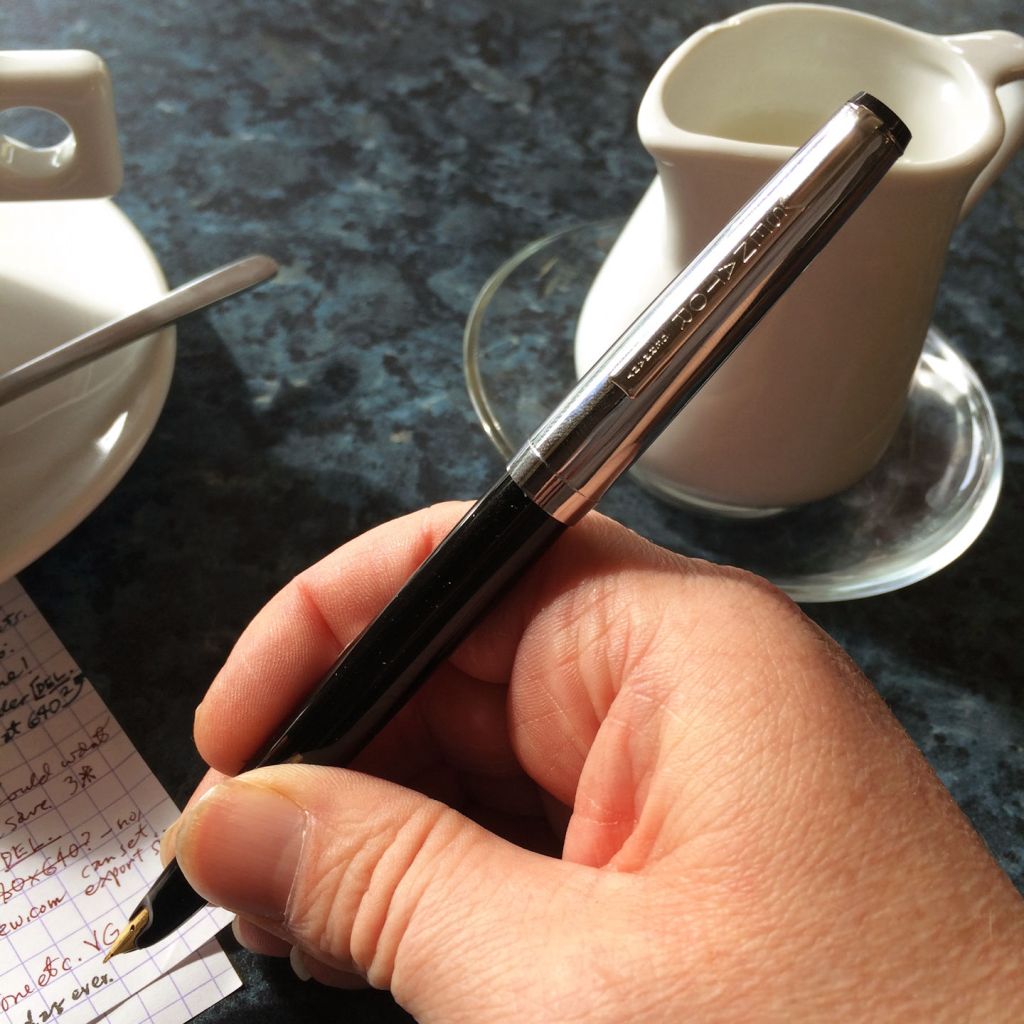 The pen was as-new — it still had the silver E.F (nib size) sticker attached to the barrel. All I know about Senator pens is from Google: “Merz & Krell made Senators and some pens under licence for Pelikan.” 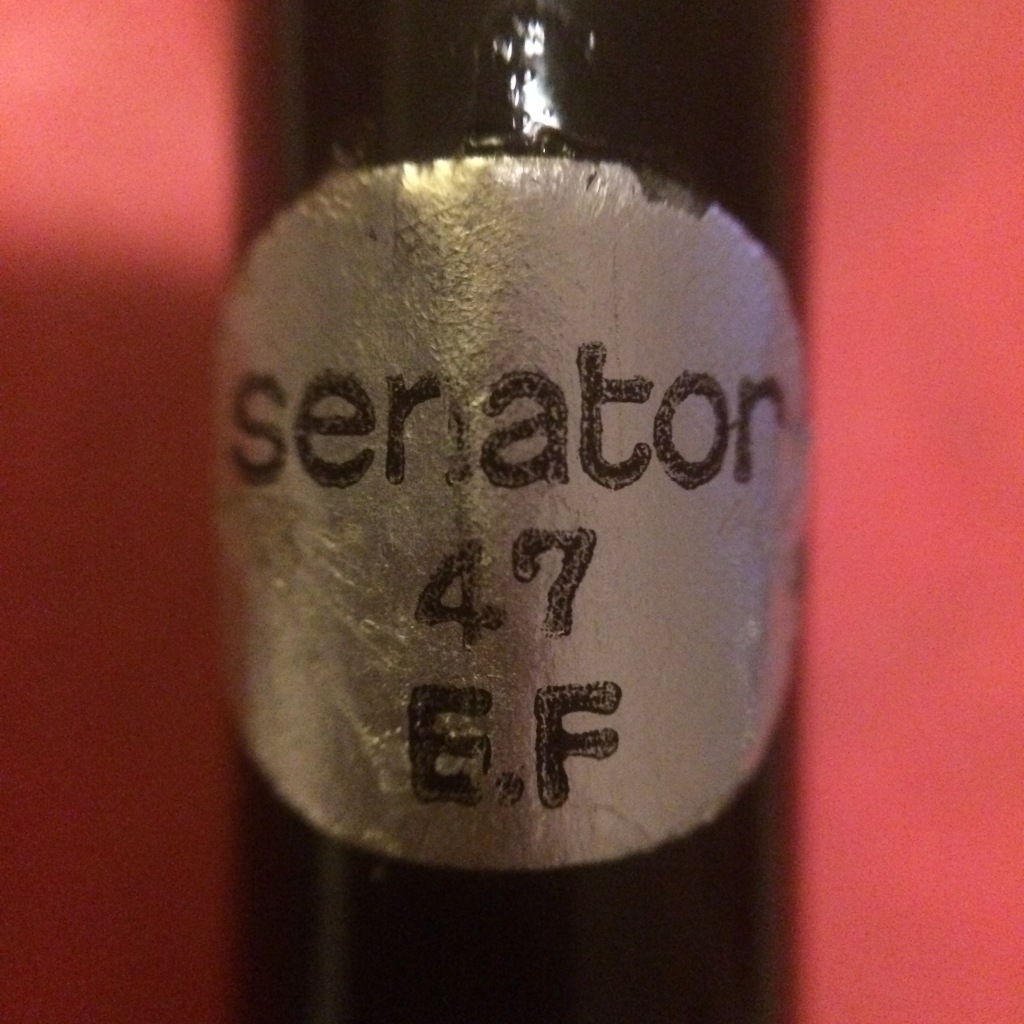 The seller promised: “EXTRA FINE SOFT SENATOR IRIDIUM POINT NIB. SMOOTH WRITING, INK FLOW ORDER.” “GOOD PEN SOFT WRITING FOR DAILY USE.” I’ve been using it for a few months and it is indeed smooth with a good flow, so reliable in fact that it is now my favourite pen, just edging it over the TWSBI 580. (The sticker is still legible but now only half attached.) 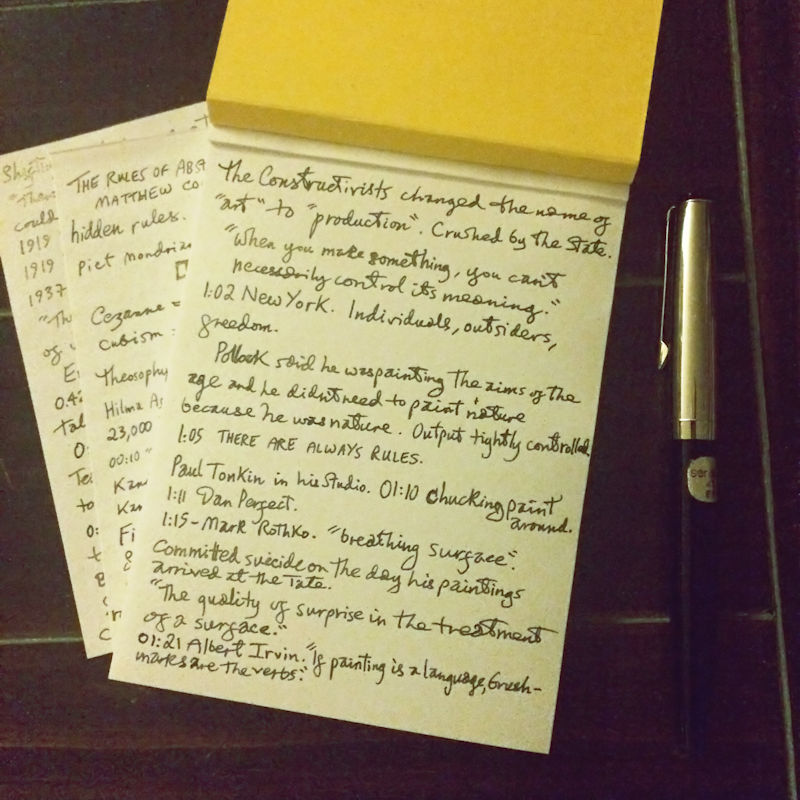 The barrel is a hard black plastic or resin, the cap is thin steel (not chrome?). The nib is gold-plated steel with an iridium extra fine tip although it writes more like a medium size with a bit of flex. The nib is partly hooded, with a diamond emblem. The 47 is a piston-filler, with a ring of transparent ink windows around the barrel in the same arrangement as the standard Noodler’s pen, except this Senator pen is dated around 1970. The grip is fine; the weight with the cap posted is still light at 11 grams and is well-balanced for me. 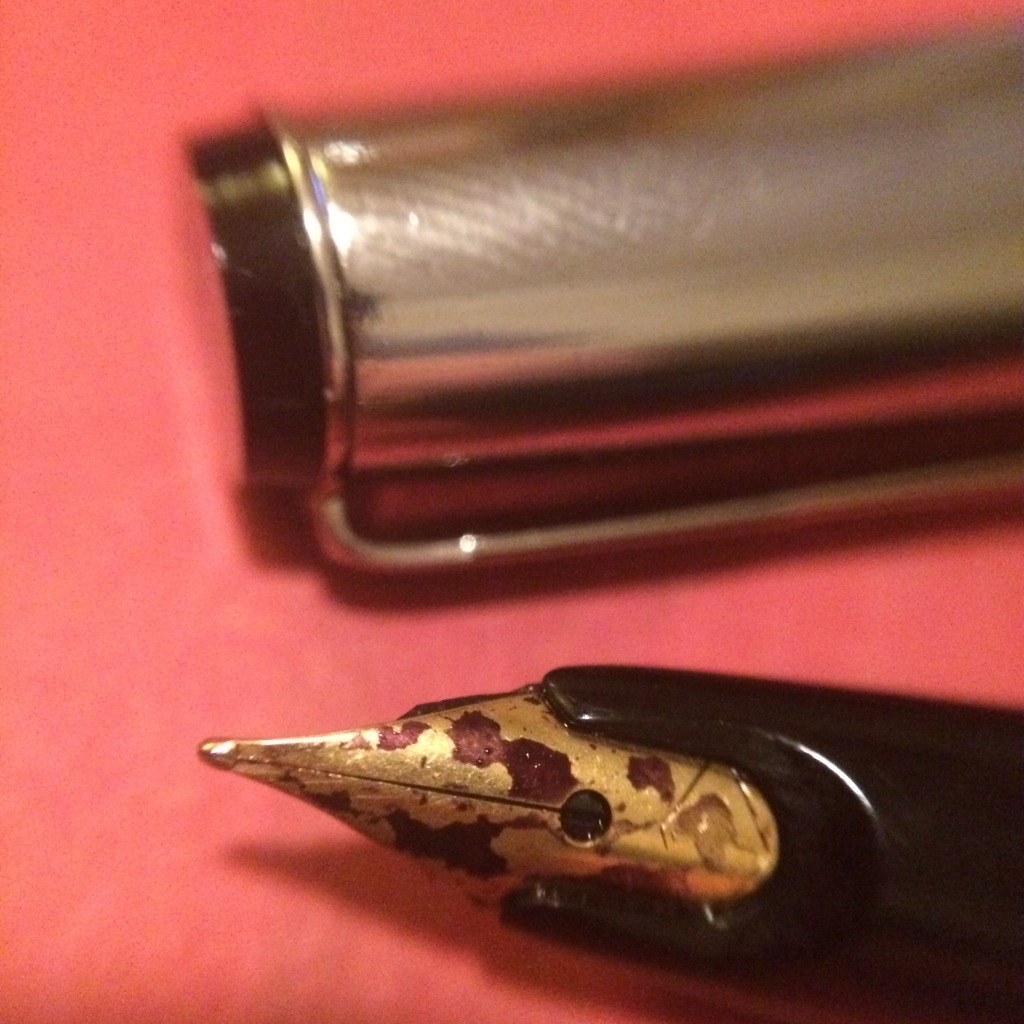 You may well find these pens on eBay or Etsy shipping from Istanbul, with burgundy or black barrels. I recommend them! As I picked up one of these NOS Senators cheaply, I thought it would not be too much of a risk to fill it with Stormy Grey 1670 Anniversary ink made by J. Herbin.

This ink was new at the time and the inclusion of real gold flakes in the ink had many pen bloggers concerned with the possibility of clogging. This has not been a problem at all. Sometimes the gold will not appear if the pen has been resting: the appearance of my script is then a normal, albeit lush, black ink. Simply inverting or rotating the pen will usually stir up lots of gold. Arrrrr, real gold, me hearties! Obviously the ink bottle needs shaking immediately before filling the pen because the metal quickly sinks to the bottom. The ink is well-behaved and quite wet, ie wetter than some other inks! It feels lubricated. And when it is dry it is dry — no smearing — after about twenty-five seconds, when the glistening black line will dry out to reveal the gold specks sticking to the paper.

Grey seems to be a misnomer: this ink is dark. The colour is similar to Noodler’s Kung-Te-Cheng ink but the gold flecks make it appear lighter. Without a reference point one might assume it is black but when compared to a really black ink such as Noodler’s Black we can see it is grey.


The ink bleeds slightly on Field Notes Finch Paper but is fine otherwise, on Rhodia for instance.

I inked the pen on Halloween last year and it’s just run out, so I added some water. Now it’s writing pretty much as before, with a lot of extra gold! Amazingly the ink seems to be just as dark. 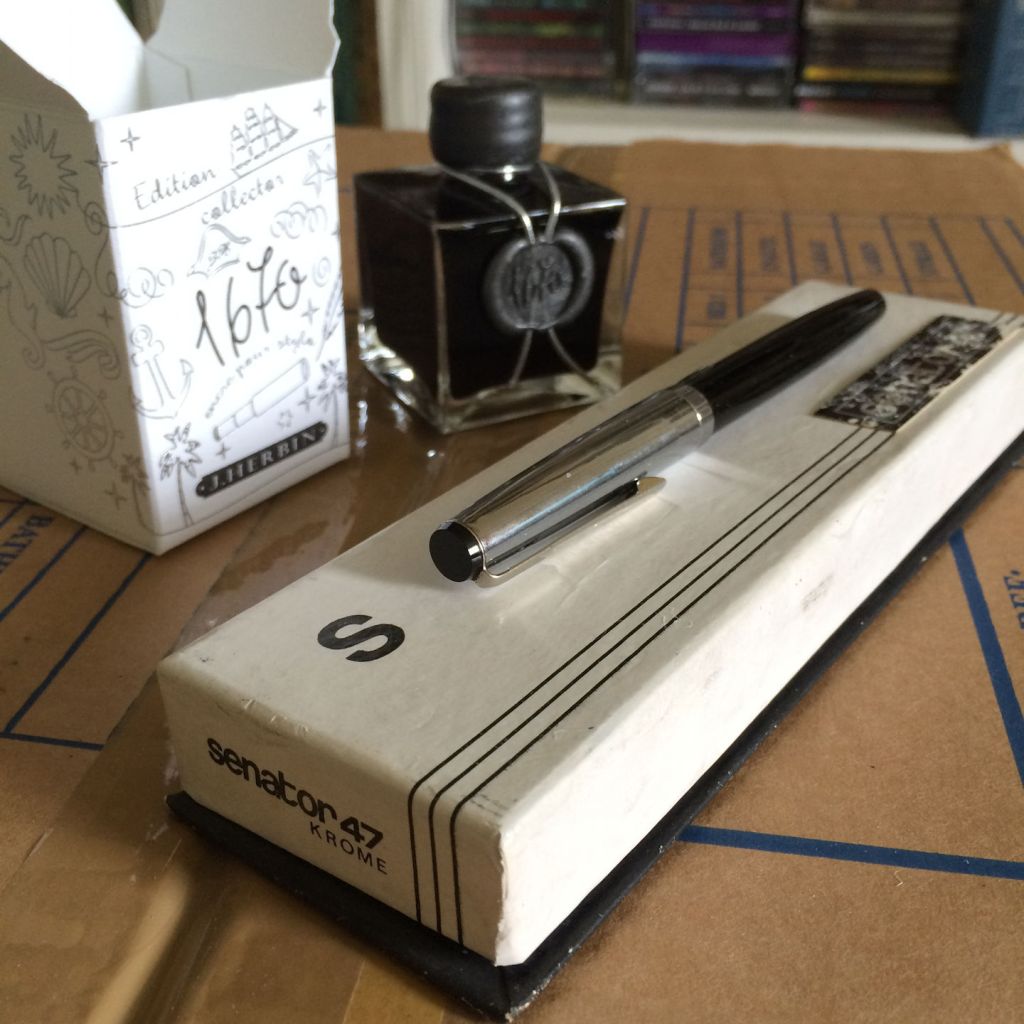 So, there are pen bargains to be had on eBay. A little knowledge is a dangerous thing of course: I have bought a few duds as well. I’ll be writing a post about fountain pens on eBay soon to let you know what I have learned.

Old mauve ink. However, I get a faded blue when I add water and use it in a pen. Anyone know how to revive it?

These are the fountain pen websites that I have found so far in the UK. I’ve tried to describe their specialities. Hover over the link to see the web page title.

UPDATE: March 2016. I’ve revised the first part of this list extensively. I’ve have also published a companion chart to help you find which shops stock which brand.

Please let me know of any errors or omissions. Ta! Enjoy!

I first called this blog ‘Pen & Ink’. I was thinking of renaming it ‘Bad Feathering’. Sounds a bit saucy! Pen & Ink, by the way, is Cockney rhyming slang for a stink. Or how about: ‘The Moving Finger’ from the famous quotation. Even saucier.

‘Pen & Ink’ is generic and there’s a tattoo site of the same name. I’ve changed the title to ‘Pensive’ which better reflects my personality and is a bona fide pen pun. Luckily I checked a dictionary before plumping for ‘Pensivity’.