The landing itself was nothing. We touched upon a shelf of rock selected by the automind and left a galaxy of dreams behind. As I emerged from the reverie I saw Piloto 4 slouched among the nav screens: the shifting patterns of space largely replaced by chat windows. I made a note of it in my log.

Note-taking is but one function of the Galactic, one where it excels. When you get over its space-age looks and the resemblance to the much more expensive Franklin-Christoph 02 or 66 Ice, the real utility of this pen starts to shine. At 32 g with ink it is heavy but because of its large size it feels lighter than it is. 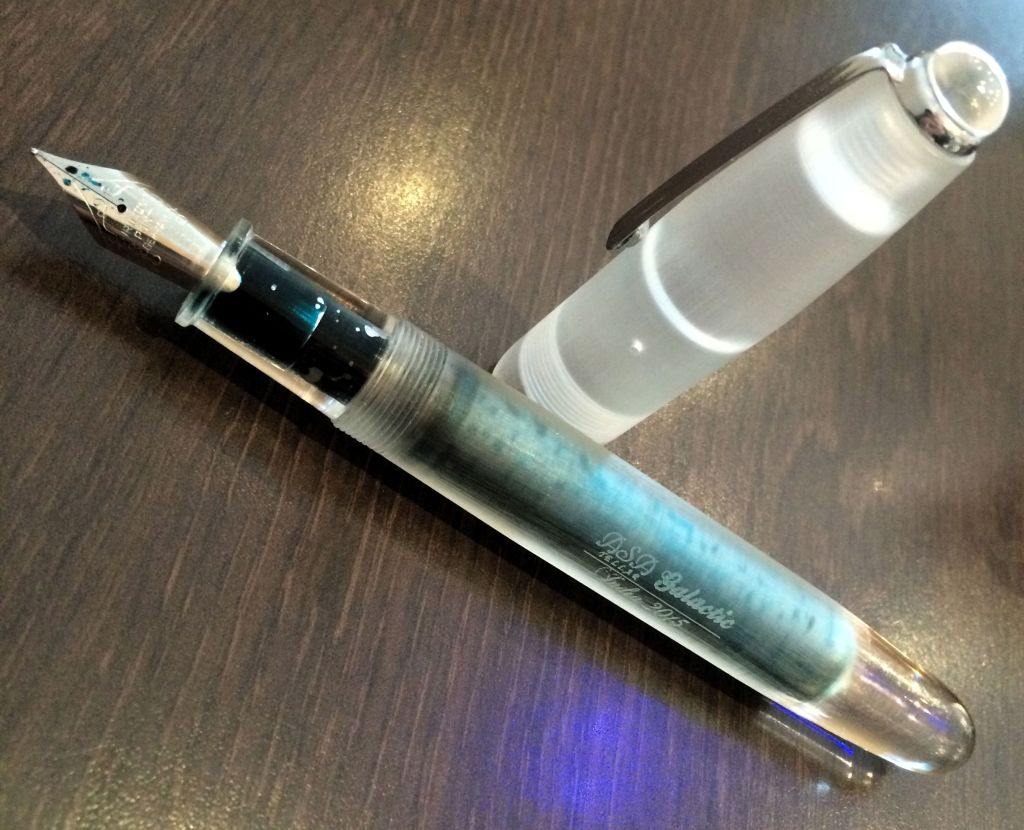 It comes with a great German nib. In use it is like a trusty needlepoint that gets grabbed when something needs to be scribbled down. I don’t even worry too much about making sure the nib is level before writing. It can handle it! No hard starts. Because of the wide girth of the grip it also reminds me of the old metal-cased marker pens of the 1960s that were similarly reliable.

The pen is gorgeous. On the brushed acrylic cap is a clear polished jewel that catches light. This unscrews to allow replacement of the stiff clip. It would be great if the jewel (a pen term for any shape of material at the end of a pen) focussed on the end of the nib inside, but it doesn’t. The cap also unscrews, a characteristic of more expensive fountain pens.

The steel nib is firm, almost hard, with practically no line variation, but very smooth and reliable. The feed is transparent so the end of the nib and the section inside can be seen, both coated with ink. This is an eyedropper pen, designed to be full of ink sloshing around and it looks pretty good with the Steel Blue ink I selected at random. It can take a lot of ink: about 4 ml. The long barrel is also brushed acrylic with a solid, polished, rounded end that looks like glass.

The barrel unscrews for filling and a small eyedropper (supplied) or syringe will be needed to transfer ink from a bottle. The threads are lightly greased to keep the ink inside.

The Diamine Steel Blue ink behaved well. It flows fine. But it looks green on the page! Definitely the green side of teal. There is not much shading and no sheen.

Two main problems: the pen does burp a little from around the nib. Some ink, just a drop or two, will blob out and transfer to the threads of the cap and the grip section. Mostly this is when the pen is still in my discarded trousers and they are flung around but this doesn’t happen with other pens. It does not look good.

The other problem for some people is going to be the thickness of the grip, exacerbated by a squared-off lip near the nib. I don’t mind the grip, in fact I can use any pen so long as the grip is not slippery, tacky, sharp-edged or brushed aluminium. 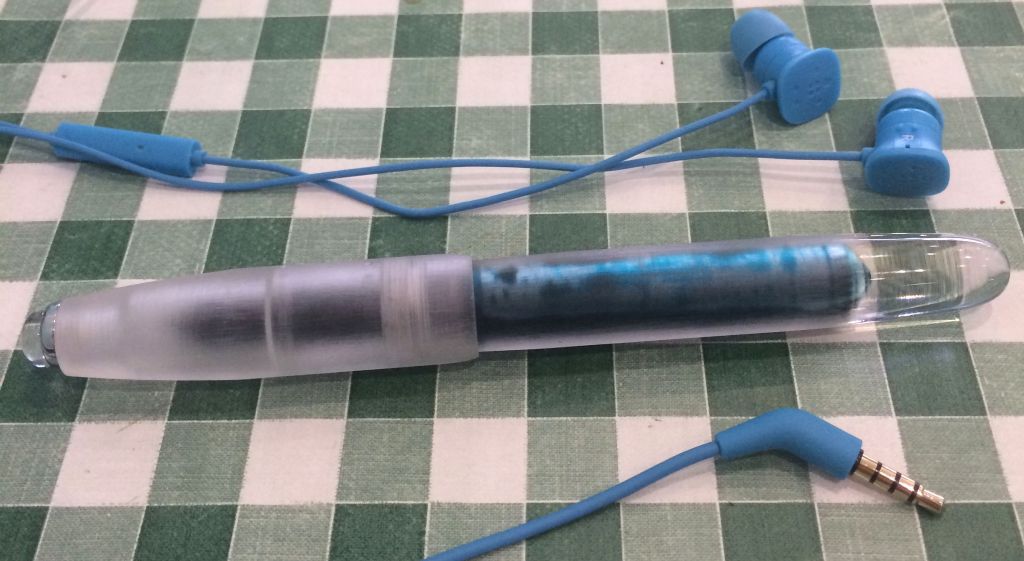 Overall I recommend this pen. The burping could be obviated by storing the pen upright when not wearing it. It’s an ever-ready note taker that also looks great. Picture: Wality 69T / Asa Galactic / Pilot Volex: 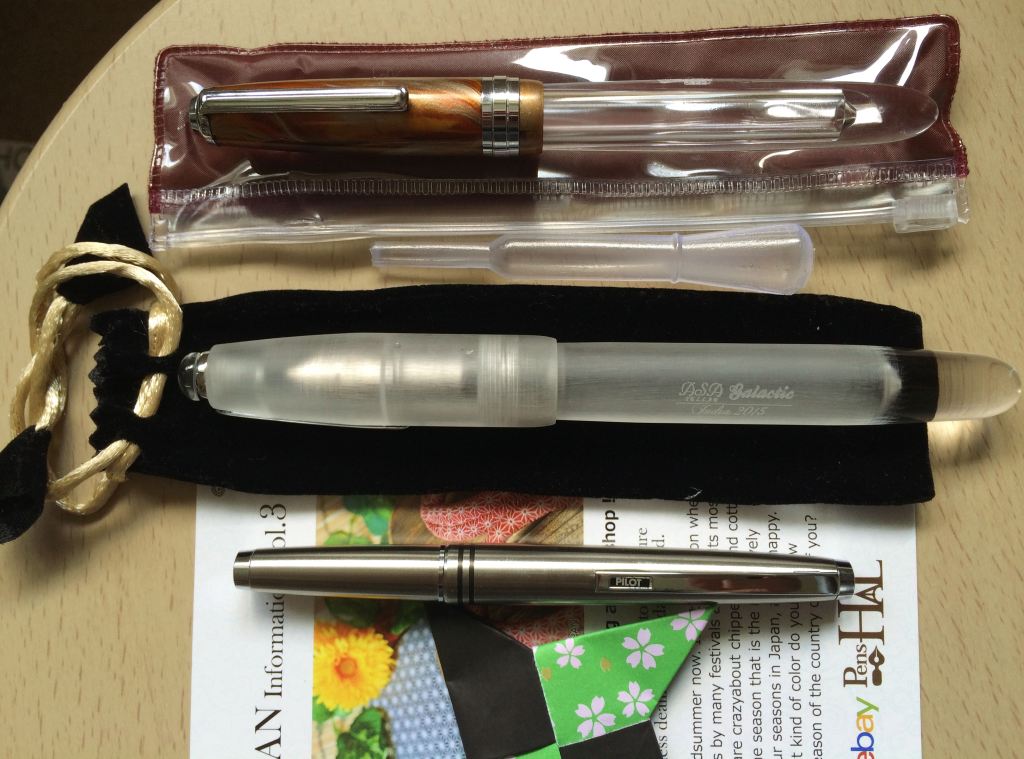 I paid £20.33 for mine from AsaPens in India. They say the Galactic is the first of the ASA Stellar series. I chose the stock nib and asked that they test the pen. There is also an option for another (Jowo?) nib instead of the stock nib. The pen was supplied in a handsome black bag with golden drawstrings.

Something was wrong: my hands felt clammy. I was holding the pen but it wasn’t ink on my fingers. A clear liquid… it must be the silicone that Asa used to seal their pens, which could only mean – pressure drop! I turned quickly and saw the meteorite hole punched through the ship wall. Nearest to hand was Piloto 4’s spare head which sealed the breach nicely. Calvert opined they might have to give me another medal, but I knew it was the Asa Galactic that deserved the award.

This site uses Akismet to reduce spam. Learn how your comment data is processed.